As this website is updated to make the data available, it is an opportunity to give some details about the very last summer campaign in Antarctica.
This campaign took place from the twelfth of January to the fifth of February 2017 at Cap Prud'Homme station, which is situated 4 km away from Dumont d'Urville station. The team was comprised of Emmanuel Le Meur (assistant professor), Fabien Gillet-Chaulet (researcher) and Charly Ouine (civic service volunteer). During the whole campaign, other people came along to help the team on the field. The goal of the fieldwork is to maintain the yearly records and to obtain continuous data set.
Accessing the Astrolabe is usually made by helicopter but depending of the motivations and the weather forecast, it can be made by ski or on foot. Once on the glacier, walking roped up is necessary because the crevasses covered by snow are hazardous (see pictures below). 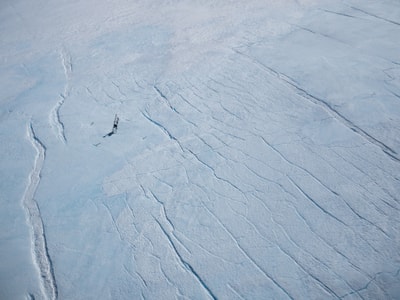 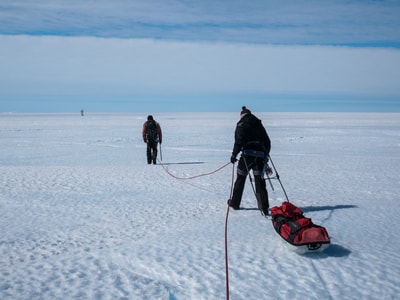 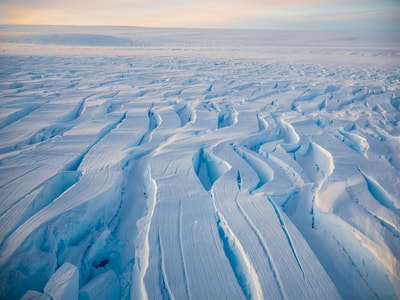 Left: An aerial view of a beacon with crevasses around.
Center: Emmanuel and Benjamin (civic service volunteer) walking on the glacier roped up and pulling the pulka.
Riht: Aerial view of a shear zone of the Astrolabe. Photos: Charly Ouine

The weather condition during this period was mild so the fieldwork was efficient. More wind came at the end of the campaign but still wasn't so extreme. The whole summer was quite warm and sunny. As a result, many beacons were tilted due to the melted basal ice (see the central picture below).
Both GPS n°5 and n°7 situated on the left side of the glacier suffered the snow drift coming from south-eastward. This explains the fact that the beacon n°5 couldn't be found (and no data have been retrieved), probably buried under snow and ice or perhaps fallen in a crevasse. The beacon n°7 had more luck, it was partially buried and has been successfully pulled up (see the left picture below). The beacon n°8 was standing on the edge of a crevasse, good for us it didn't fall down (see the right picture below). Some other beacons stood literally in a pool of a meter deep because of the melted ice. Only a few issues have been faced regarding the other beacons. 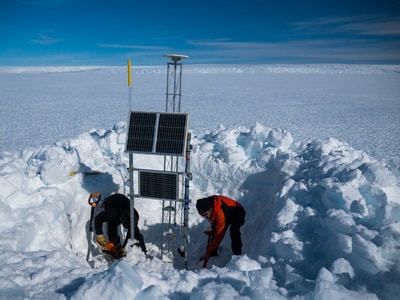 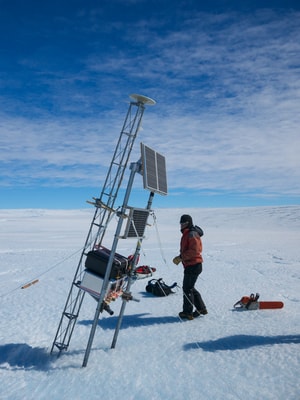 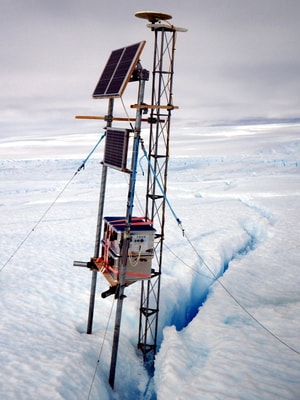 Left: Emmanuel and Fabien digging up the beacon.
Center: Tilted beacon due to the basal melted ice.
Right: Crevasse opened under the beacon. Photos: Charly Ouine

Each beacon is made of a Trimble GPS, an antenna, batteries and solar panels, everything held together with a metallic structure and guy wires. Every acquirement is recorded in an USB device. The raw data are extracted and then converted into RINEX format in order to share the informations.
The downstream beacons are reinstalled upstream to record the same area from a year to another. Depending on the terrain, these beacons are moved either by helicopter or by ski in a pulka. After we leave the white continent, we can only keep the fingers crossed that the beacons face any issue.

This scientific program works thanks to the technical team at Cap Prud'Homme station. These people allow us to settle in their station, which is specially made in order to supply Concordia station. Cap Prud'Homme is a rather small installation and scientific gears take a lot of space, still this partnership between the scientists and the technical staff works very well.
We would like to thank the technical team and the helicopter pilots for giving a bit of their time spending on this program. 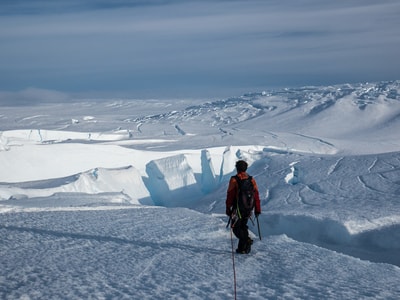 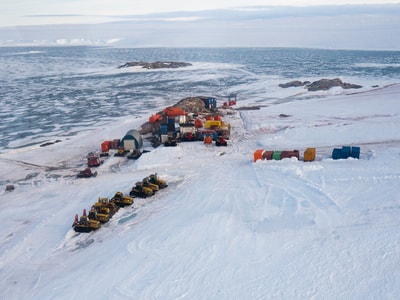 Left: Walking on the shear zone of the right side of the Astrolabe glacier.
Right: Aerial view of Cap Prud'Homme station. Photos: Charly Ouine