Because of sea level equivalent volumes of 70 and 7 m respectivly, large ice sheets like Antactica and Greenland can potentially contribute to a significant rise of the oceans in the future. The state of balance (in terms of gain or loss of ice mass) is therefore a big scientific challenge which led to various and multidisciplinary approaches. Amongst them, are those trying to directly assess ice sheet volume changes from altimertry (from satellites or airborne) but the different results are barely in agreement with one another and remain controversial. Measuring accurately the Earth gravity field changes through time (GRACE mission) appears as a proxy for quantifying mass exchanges between the cryosphere and the oceans. Results obtained so far suggest a positive contribution of the antarctic ice sheet to sea level. However, many uncertainties remain resulting in error bars that still prevent a sustainable trend to clearly emerge.

Another approach consists of quatifying the overall ablation (and its changes) under the form of the total ice discharge to the sea through coastal glaciers and ice streams (especially for Antarctica where this process accounts for almost all ice loss because of no significant peripheral melting). The proposed program aims at a better understanding of these coastal outlet glaciers and ice streams with the help of both field measurements and numerical modelling of their dynamics.

The project consists of collecting necessary field data for first a better understanding and then for allowing numerical modelling of the dynamics of these outlet glaciers which drain most of the ice sheet towards the sea. This work follows from recent observations of a generalized velocity increase of Greenland coastal outlet glaciers responsible for a significantly negative inbalance of the ice sheet and ensuing enhanced contribution to sea level (Rignot and Kanagaratnam, 2006). If on the one hand West Antarctica seems to undergo a similar tendency with the loss of ice shelves, the thinning and concomitant speed up of large outlet glaciers (e.g. Pine Island Glacier, Rignot 1998), the role of East Antarctica, although potentially more threatening in terms of sea level, remains on the other hand unclear. The planned work will concentrate on a test zone (Astrolabe Glacier, see following figure) where necessary field measurements will help understand and serve for numerical modelling of the current and future dynamics of the glacier. Measuring total ice discharge along the coast as well as through nearby larger outlet glaciers (Mertz, Ninnis, Dibble glaciers, each draining several tens of cubic km per year) is also part of the project as it will constrain the mass balance of this entire sector of Antarctica and allow to assess the degree of representativeness of our test zone. 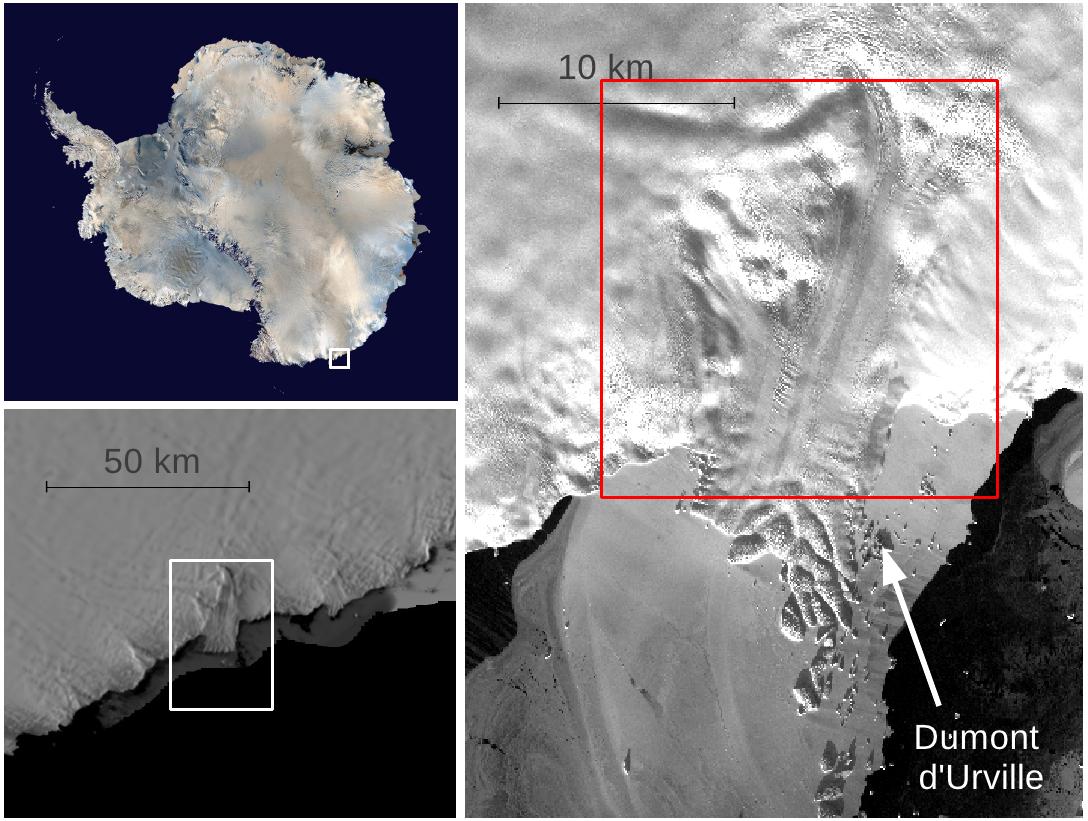 Localization of the Astrolabe observatory glacier in Antarctica (from Le Meur et al., 2013)

Field data are of two types depending on whether they directly tell about the dynamics or serve as input for modelling the ice flow. From the ice surface velocities and ice thicknesses measured at the grounding line (where the glacier starts to float) it is possible to compute the ice outflow to the sea. As for ice flow modelling, surface mass balance as well as bedrock topography are required (surface velocities on the other hand offer means of constraining the model).

Dynamics of outlet glaciers are very specific (compared to the rest of the ice sheet) as they are principally controlled by small-scale processes (of the order of the ice thickness) like topography, geological and hydrological properties of the bedrock. It therefore requires field data collected at a high resolution for feeding the flow model. This is one of the reasons why the modelling effort will ocncentrate on the Astrolabe test zone whose reasonable size and closeness to the Dumont D'Urville base will help to achieve the required standarts for field data. The degree of representativeness of the test zone for this entire sector of Antarctica will be tested by comparing the modelling results with larger-scale measurements undertaken over the nearby large outlet glaciers (like flux measurements for instance). 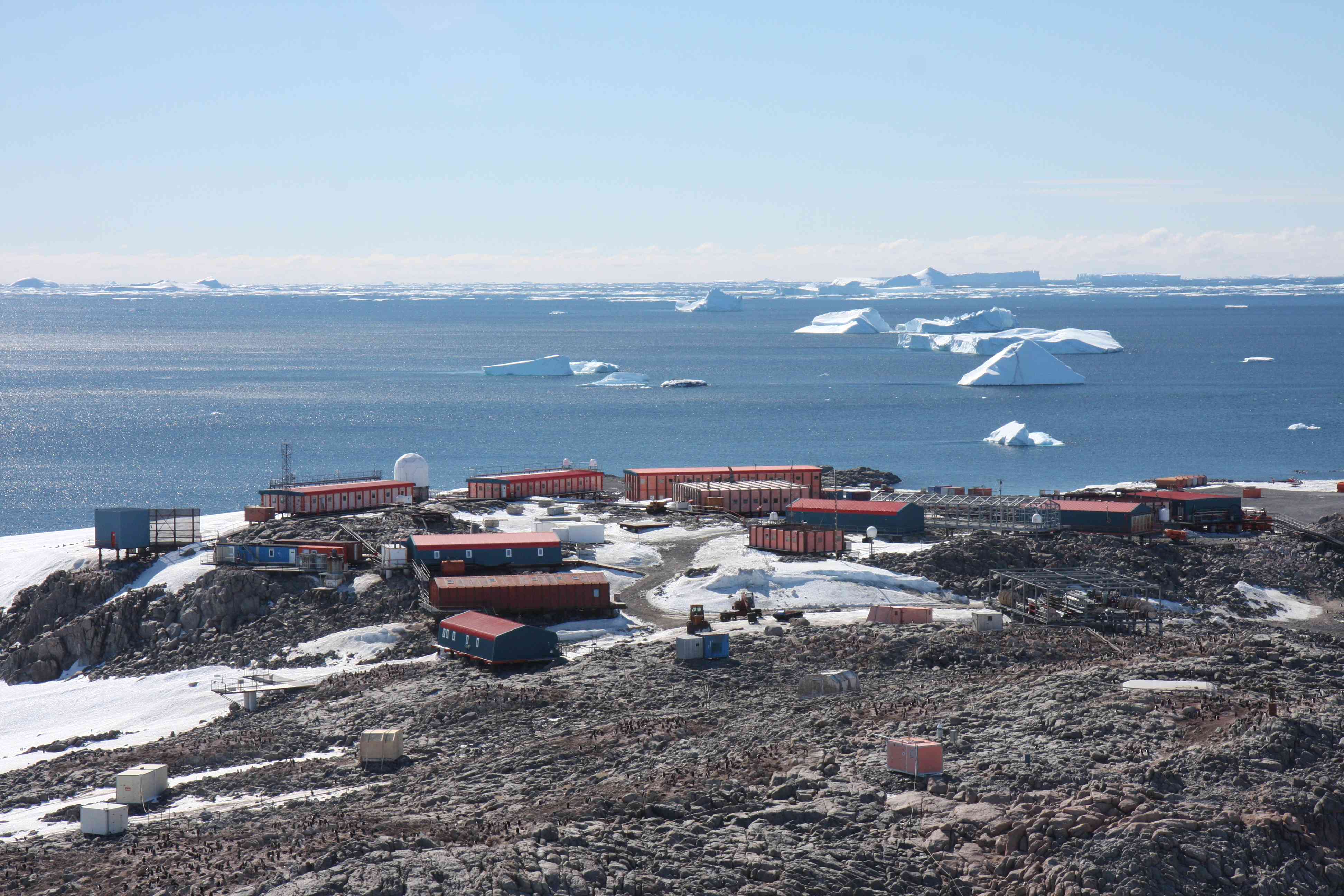 Because of these specific dynamics operating at a small scale, traditionnal models based on the Shallow Ice Approximation (SIA) can not be used anymore (contrary to the grounded part of ice sheets, see Le Meur et Al., 2004 for instance). True 3-Dimensionnal models solving the full set of the mechanical Stokes equations (so-called 'full Stokes models) will be used instead. These high resolution models can only span restricted parts of the ice sheet and therefore have to be inserted within larger-scale models covering the entire ice domain and providing the boundary conditions for the domain of focus (drainage basin). These processes of model insertion require complex formalisms of model coupling and grid matching that we plan to address in collaboration with specialized partners.